A calf has been given a second lease on life after he received prosthetic legs to replace the two hind legs that he lost to frostbite. 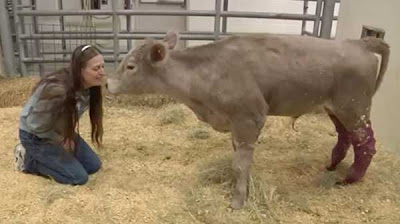 Hero the calf was rescued by Kitty Martin who took the young cow from Virginia to Texas A&M University for treatment.

Kitty explained she was scared the calf wouldn't make it: "If they felt that it was against his quality of life he would be put down and I had no idea whether he was going to walk out of here or not, but I loved him that much to take a chance."

Kitty is now hoping that Hero will be back out on the range as soon as he gets a little less wobbly on his artificial hooves.
Posted by arbroath at 6:04 am
Email ThisBlogThis!Share to TwitterShare to Facebook

I do believe that's TexAs...