A former alcohol abuse campaigner is facing jail after she admitted driving while almost five times the legal drinking limit. Eileen McArthur, 47, a former senior planning officer for Focus on Alcohol Angus which campaigns against alcohol misuse, was found drunk behind the wheel of her car twice in the space of three weeks. McArthur, who now runs an event management firm, could face a jail term over the two incidents.

She pled guilty at Forfar Sheriff Court to driving on Lentlands Road, Forfar, and on other roads between Forfar and her home in Glamis on August 19 last year with an alcohol count of 171 microgrammes in 100 millilitres of breath. The legal limit is 35. She further admitted driving or attempting to drive on Main Street, Glamis, near Forfar, on September 9 last year while unfit through drink or drugs. McArthur spent several years as senior planning officer for Angus Council's Focus on Alcohol scheme. It is part of the local authority's Alcohol and Drugs Partnership which tackles personal, family and social issues associated with alcohol. 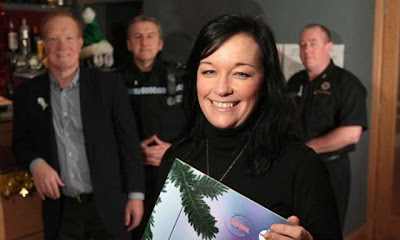 McArthur was responsible for spearheading anti-drink abuse initiatives as well as highlighting Angus-based projects at national level at events and conferences. Angus Council confirmed McArthur is no longer employed by the authority. McArthur pleaded guilty to a charge of drink driving and another of driving or attempting to drive while unfit through drink or drugs. Sheriff Kevin Veal deferred sentence on McArthur until February for social work background reports. He also banned McArthur from driving between now and her sentencing hearing, where she could face a prison term.

Carole Whittingham, of the Campaign Against Drink Driving, said: "I have heard of five-and-a-half times the limit but I've certainly never heard of that level for a female driver. She must have consumed a considerably amount of alcohol to register that. It wasn't just one for the road. She could have killed somebody so easily and once you have done that your life and so many other lives are changed forever. Given her previous interest in helping other people with alcohol problems, I assume that when she does go for sentence the court will take into account that she does herself need help."
Posted by arbroath at 6:00 am
Email ThisBlogThis!Share to TwitterShare to Facebook

Good grief. In the U.S., legal limits are expressed differently, with conservative states using the 0.8 limit for statutory intoxication. 5 times that is 4.0, and that's, like, being comatose!