A town council in Northumberland has been forced to keep the town's Christmas tree up, four weeks after the close of the festive period, because a bird's nest was discovered in among the branches. 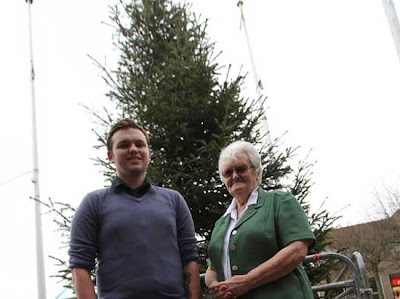 The bird and her three eggs have left council officials at a loss after they were discovered just as staff were about the remove the tree from outside Concordia Leisure Centre in Cramlington. After consulting the RSPB, the town council has been forced to tell irritated residents that there is nothing they can do about the tree.

Adam Harvey, administrative assistant at Cramlington Town Council, said: “We went to take it down and I got a call from the people due to take it down saying there was a bird’s nest with three eggs. They said due to the law they could not do anything about it.” The council has been receiving complaints from residents about the tree still being up, but now officials are having to say there is nothing they can do until the birds are hatched and have flown the nest.

“I can’t see them myself but I have been trying,” said Adam. “I called the RSPB and they said unfortunately we could not do anything until they had left the nest and that can take up to three weeks. We are not neglecting our duties so it will be a little longer than the festive period that we have our tree,” he said.
Posted by arbroath at 6:02 am
Email ThisBlogThis!Share to TwitterShare to Facebook

Irritated residents? Have they such full happy lives that a rogue xmas tree is ruining their day?

I know, it's shocking isn't it!

What Ratz said. This is one of those times when I want to say, "C'mon, people! Complain about something -worth- complaining about!"

Also reminds me of the parental warning, "Stop your crying or I'll give you something to cry about!" E.g., one could put a clutch of pheasant eggs into every complainer's wheelie bin. ;)