One of Queensland’s elite private schools has sacked its director of rowing in a ­bizarre sex-talk scandal. David Bellamy, one of Australia’s most respected coaches, was dismissed by Brisbane Boys’ College after telling rowers not to twirl their “wangas”: slang for ­penises. 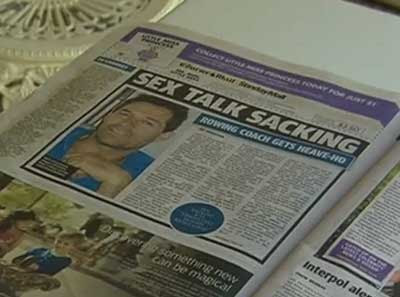 Bellamy also admitted using “theatrical body movements” and waving his finger in front of his trousers to mimic a penis as he spoke to 50 rowers and coaches on January 14. Bellamy declined to ­comment, but friends with intimate knowledge of the affair said he used the word humorously when giving the boys a serious warning not to repeat the sexual pranks that had marred a previous rowing camp.

It is understood a mother who overheard the speech complained that Bellamy’s words and actions were inappropriate in a church school. The college, run by the Presbyterian and Uniting churches, is also understood to have received other ­complaints from parents whose sons had told them about the “wanga” word. Headmaster Graeme McDonald told staff of his dismissal in an email on February 11. Angry parents have rushed to Bellamy’s support, saying the incident was blown out of proportion and his dismissal an injustice.
Posted by arbroath at 6:01 am
Email ThisBlogThis!Share to TwitterShare to Facebook

I hate it when they punish all the cool teachers. It's a guy teacher talking to a class of boys!

More god-bothering idiots. There should be a law against lying.

Did he get through to the boys? YES. Have they heard much worse? DEFINITELY. What a stupid, stupid person causes this type of idiotic backlash. Here in Australia, this is far less a word than is accepted on ordinary afternoon TV.

God people are scared of their wangas.