A camera on board his Piper Saratoga captured the moments a bird struck his windscreen, sending pieces of plastic and electronics into his face. 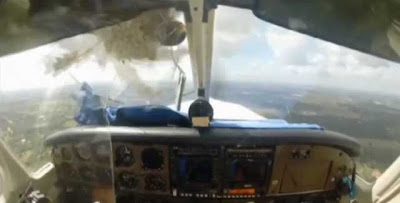 Weber kept his cool, even after noticing he was bleeding from the forehead, and made a calm landing.

Weber says it was a minor cut and he refused medical service, but he feels lucky he wasn't knocked out. He was the only one on board at the time, so it was up to him to land the plane.

Video.
Posted by arbroath at 6:06 am
Email ThisBlogThis!Share to TwitterShare to Facebook