A giant four-metre surfing crocodile closed Broome’s iconic Cable Beach, one of Western Australia's major tourism hotspots, for a day before moving on. 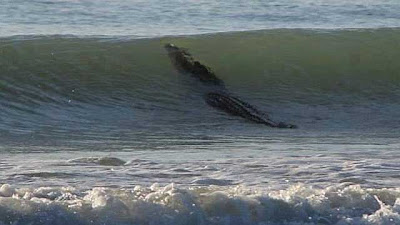 The crocodile hung around for most of Saturday but had moved on by Sunday. Broome woman Sharon Scoble, who took these photographs, said: “He was a big boy - his head was huge.’’

“It was absolutely awesome,” Ms Scoble said. “But it wouldn’t have been so awesome if I was swimming and noticed it. Rangers were there so they were making sure no one was going near it.” 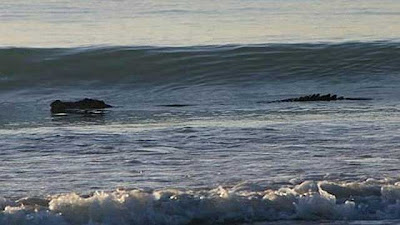 Local Parks and Wildlife officer Dave Woods said the animal would be targeted for removal to the Malcolm Douglas Wilderness Park, near Broome.
Posted by arbroath at 6:03 am
Email ThisBlogThis!Share to TwitterShare to Facebook