A Florida woman has been battling with the courts for years to get her case heard. And now after a recent court decision, she is able to move forward with a discrimination lawsuit against Paradise Lakes Resort in Lutz where clothing is optional, but the size of your pet is not. 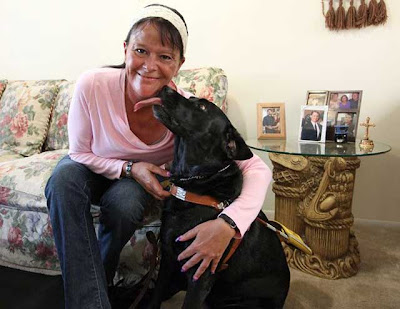 Sharon Fowler has had her faithful companion Laura by her side for 2½ years. Fowler, who is legally blind, got Laura through Southeastern Guide Dogs Services and needs her to get around. "I can be anywhere in Paradise Lakes and tell Laura to take me home and she takes me home," says Fowler. Problems for Fowler and Laura began in 2012 when management sent a letter saying Laura is over the 25-pound weight limit and needed to go.

Even though, Fowler says she provided management with all the proper documentation. "Laura was too big to be here, she was out of control and needed to be removed off the property, or we would be fined $50 a day," Fowler said. Fowler says from there things only got worse. "At that point I was in tears, I was being degraded, it was the most horrible experience I'd ever had."

That's when she hired an attorney and filed a discrimination lawsuit. "I don't want anyone who has a service dog to ever be treated the way I've been treated. Someone has to stand up and say enough is enough," said Fowler. Fowler may be legally blind, but she hopes justice for her and Laura won't be. Fowler and her attorney plan to re-file the lawsuit under the Federal Fair Housing Act. They are seeking an undisclosed amount of money for mental anguish.
Posted by arbroath at 6:05 am
Email ThisBlogThis!Share to TwitterShare to Facebook

"Fowler may be legally blind, but she hopes justice for her and Laura won't be."

Why would she hope that? Does she think an impartial judge would rule against her then?

That wasn't a quote, that was the reporter trying to be clever.

"That wasn't a quote, that was the reporter trying to be clever."

Thank you for clearing that up for me, Bruce. And here I thought it was Ms. Fowler who had written the article.

PS. That was sarcastic.

Yeah yeah, you two, but I want to know WHY she wants to go to a nudist resort when she is blind ?????

Maybe it's more about being naked herself, not about seeing other people naked. I would suspect that's why most nudists do what they do.

I thought there were laws permitting service dogs everywhere. They're specially trained, and their people need them. I admit to a pro-dog, pro-animal bias.

Although it's a vacation destination and day use facility with, "Cabanas, Townhomes, Villas, RV Sites, Tent Sites" for rent, they also have a condominium community. I got the impression she was living there full time rather than visiting. That's why she's pursued this.