A twenty-dollar bill dropped into a storm drain led to a Lawton, Oklahoma man being stuck in the city's underground water drainage system for two days. The man told police that he dropped the money into a storm water drain. He said that he had no choice but to go in after the lost money. But once underground, he lost his way, leaving him with little to do but hope someone would hear his calls for help.

A group of high school students walking home from school through the intersection heard a strange voice coming from the manhole and quickly realized that it was a man calling for help. They called 911 and once on the scene, it was hard for officers to believe what they heard. "We could hear a man yelling for help," said Sergeant John Chelenza. What followed was unexpected; once the manhole was removed it revealed a sight that Sergeant Chelenza and police officer in training Alicia Redding could not believe. "We see a gentleman down in the bottom of it and it seemed that he had been down there a couple of days," said Chelenza. 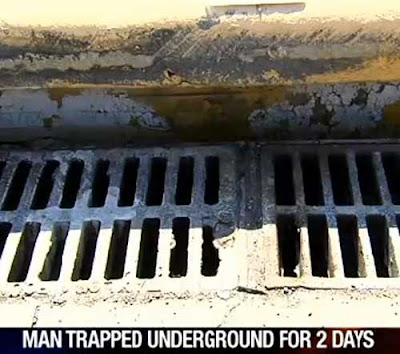 "I was amazed. I was confused how he had gotten down there and amazed that he was still okay," said Redding. "That's the first time in going on 28 years that we have found somebody down in a storm drain," Chelenza recalled. The man was between twelve and fifteen feet below street level in a dark and wet pipe, a spot he would need a ladder to get out of. And his condition was not great. "He did not remember what day it was. He wasn't sure how long he had been down there. He was pretty dehydrated and not really sure the time the date," said Redding. The man also had some injuries, likely sustained during his time underground.

"He had a bump on his head, he may have hit his head against a wall down there because it obviously pretty dark unless he is next to a storm drain where light could get into," said Chelenza And the man was not able to tell police anything about how or where he got into the city's underground water system. But city officials believe it had to be through a storm drain and once inside it's probable that he became disoriented. City officials said the pipe that the man was in had a 42-inch diameter meaning he was forced to make his way by crawling. Despite all of his efforts he never found his twenty-dollar bill he was searching for.