A Japanese dress hire company has stumbled across an unexpected demand for men to be photographed in women's bridal wear. 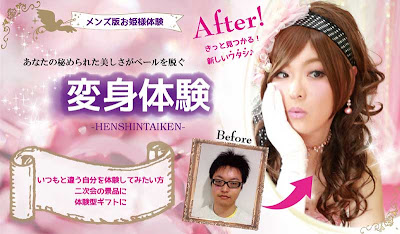 Marry Mariee, in the city of Fukui, began offering the photo shoots for men last year after it advertised a plan to photograph women in gorgeous dresses. To its surprise, the company received a large number of inquiries from men. "We concluded that men want to feel like princesses, too," said Hitomi Iseki, a 42-year-old manager of Marry Mariee.

The company has some 100 wedding and other formal dresses that can be altered to fit men. It has tied up with a nearby barber shop where men have their faces shaved and hair shampooed before having makeup applied at Marry Mariee. The preparations take around two hours, after which the photo shoot begins. 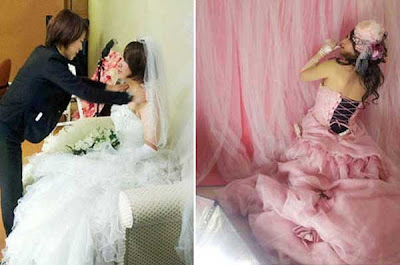 The service costs 39,800 yen (£230, $390) on weekdays and 59,800 yen (£350, $585) on weekends and holidays, excluding tax. In the interests of gender equality, Marry Mariee also offers sessions for women who want to be photographed in men's clothes. "We want to provide opportunities for people to enjoy showing their real selves, whether they are men or women," Iseki said.
Posted by arbroath at 6:03 am
Email ThisBlogThis!Share to TwitterShare to Facebook

I have so many questions and am speechless, all at once