Frilund, 64, has spent his spare time fishing in the waters around his home town of Eidsbygda, western Norway, for as long as he can remember. But this is the first time he's heard of fish swallowing discarded sex aids. "I was astonished," he said. "It was totally unexpected. I had never seen anything like this before." 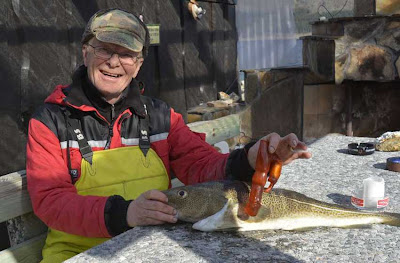 Nonetheless, he said that it was amazing that such an unusual object was even there for the fish to swallow. He speculated that the machine, which still had a small motor at one end but no batteries, had been tossed off a boat, perhaps by "a frustrated woman on a cruise" in the Barents Sea. "The chances of winning the lottery are probably greater," he added. The cod was filleted and given away.
Posted by arbroath at 6:02 am
Email ThisBlogThis!Share to TwitterShare to Facebook