Politician ejected from Italian parliament for waving fish around

A politician from the Northern League was thrown out of the lower house of the Italian parliament on Tuesday for waving a fish in protest against a bill that could see clandestine immigration decriminalized. 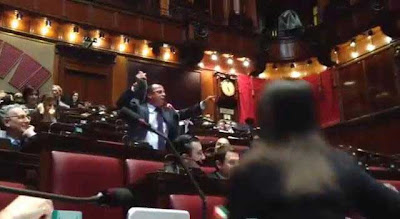 As MPs debated the potential reform, Gianluca Buonanno, from the anti-immigrant Northern League, pulled a sea bass from under his bench and started brandishing it around.

He went on to say that , by debating whether to allow these immigrants to live legally in Italy, the government was neglecting the country’s pensioners, who, in order to get by, eat “anchovies and sardines”.

“This is for the House Speaker, who eats sea bass, while being moralistic about others, our pensioners and our unemployed.” He was eventually ejected by Deputy House Speaker Luigi Di Maio after failed attempts to get him to stop waving the fish. The Northern League co-sponsored the law making illegal immigration a crime during the reign of ex-premier Silvio Berlusconi.
Posted by arbroath at 6:03 am
Email ThisBlogThis!Share to TwitterShare to Facebook