A birthday card that was intended to reach a young Brooklyn woman on her 19th birthday has finally reached its destination, 45 years after it was first mailed. Receiving the decades old card left Susan Heifetz stunned. 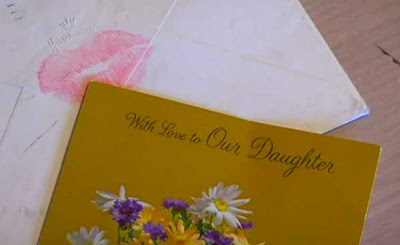 Her parents both passed away more than a decade ago but the envelope was postmarked June 26, 1969. “I always knew that my parents watched over the family. It’s something else to get something like this. It validates everything,” she said. The letter was delivered to an apartment on East 12th Street in Brooklyn last week. 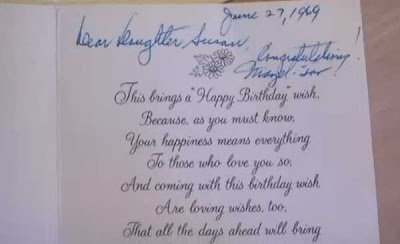 It’s the apartment where Heifetz and her family lived 45 years ago. The current tenant tracked Heifetz down and contacted her over the phone. “I said ‘tell me what else is on the envelope,’ at which point she said to me ‘on the back is a lipstick mark,’ and at that point I started to cry,” Heifetz said, “This was my mother’s thing at the time. To always seal it with a kiss.”

Three days later Heifetz, now living in Floral Park, New York, received a letter from 1969 that was written by an old boyfriend who was serving in Vietnam. Her local post office also discovered a birthday card that her brother Barry had sent her 45 years years ago. “It’s obviously some kind of blessing from above,” Barry said. The post office say that they don’t know where the letters have been.
Posted by arbroath at 6:06 am
Email ThisBlogThis!Share to TwitterShare to Facebook

"The post office say that they don’t know where the letters have been."

My hairy butt. They'd fallen behind some cabinet and were only recently re-discovered.