An 89-year-old store owner in Washington state used a golf club to beat off a suspected robber who wielded a sword, prompting the suspect to drop the stolen cash register as he made away on a bicycle, according to police. Police in the 21,000-population city of Moses Lake say owner Miyo Koba was inside Frank's Superette on Sunday morning when a tall, slender male wearing a ski mask and dark glasses swooped in. 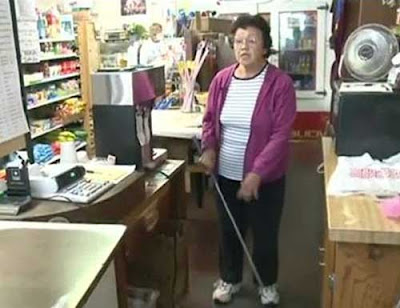 Koba has owned the store in this community between Seattle and Spokane for 60 years, and kept it up even after her husband died, police said. When Koba found the suspect standing behind the cash register, she set about a campaign of aggression. Police describe Koba as a small woman who weighs no more than 125 pounds. "I had the scissors in my hand like this, and he was trying to open the till, and he said, 'Open the till!' " Koba said. "I said, 'No, I'm not going to open the till for you,' and I said, 'If you don't get your hands off the till, I'm going to stab you with my scissors.' But I didn't. I didn't have the nerve to stab him," 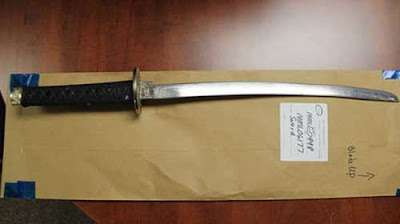 However, her tactics apparently had an effect. The suspect became unnerved when Koba would not open the register. "He started pounding on the register trying to open it," Koba said. "He pulled out his little sword out of his little jacket, and he just kind of waved it a little bit," she said, making reference to the man's 3-foot weapon. “I didn't feel threatened. It just probably made me a little bit more brave,” said Koba. She said the man pushed her slightly to get away. “I fell down here and so I got into a sitting position.

“I got into a sitting position and I found the club so I went tried to swing this club at him and I tried to hit his head a couple times but I couldn't reach it,” said Koba. So she went for his legs, swinging and hitting them. The man escaped on a bicycle, cash register and sword in tow, but police said Koba later recovered the register nearby with the money still in it. The man apparently stripped after he left the store because police found his clothing after the incident. “He must have been running around in his underwear and no shoes because that's what they said, they found all his clothes,” said Koba. Police are still searching for the man.
Posted by arbroath at 6:06 am
Email ThisBlogThis!Share to TwitterShare to Facebook