Shoppers at Asda in Cwmbran, south Wales, had a surprise on Saturday when they spotted an elated bride in full white wedding dress picking up drinks for her own party. 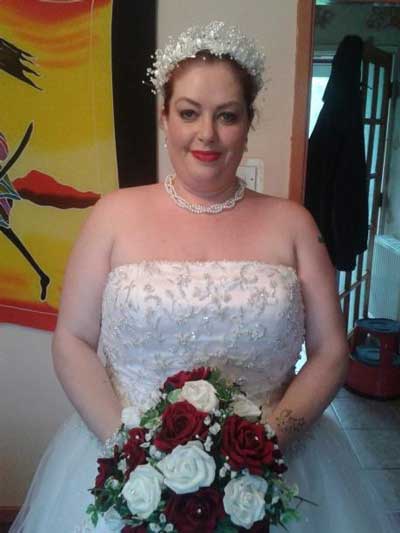 Anna Savery, 39, had tied the knot with James, 26, her partner of four years, just hours earlier, followed by a meal at the Irie Shack in Cwmbran where everyone paid their way. “After that we decided that we didn’t want to just go home,” the new Mrs Savery said.

“My mum said we could go to her house but we had to get our own booze, which was fair enough. She wanted to quickly tidy the house before we arrived.” So the new Mrs Savery decided to pop into the local supermarket, but wasn’t expecting the deluge of well-wishes from fellow shoppers.

“People were coming up and asking me for photos,” she said. “People were telling me I looked beautiful, asking me if I’d got married that day. A little girl said I looked like a princess. I have been in there in my pyjamas and nobody blinked an eye. I did not expect the reaction that I got. It’s something I’m never, ever going to forget.”
Posted by arbroath at 6:01 am
Email ThisBlogThis!Share to TwitterShare to Facebook