Gangster Domenyk Noonan scaled Manchester’s Big Wheel in a protest against plans to recall him to prison. Noonan is one of Manchester's most notorious criminals, rising to fame in the 1980s after orchestrating the riots in Strangeways prison. The 49-year-old climbed onto the roof of one of the pods of the giant wheel in Piccadilly Gardens before climbing ladders to its centre, about 100ft above the ground. 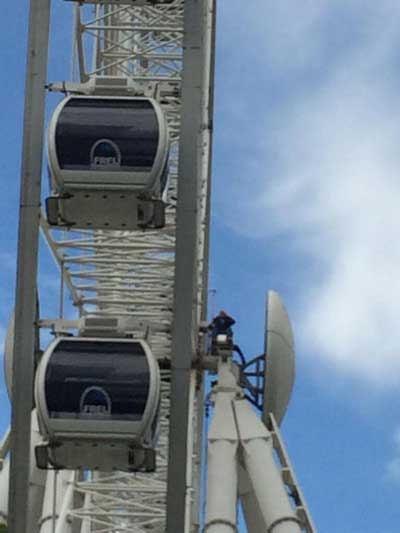 The drama started at 3.30pm on Tuesday. Operators of the Big Wheel shut it down with some customers stranded in other pods. Speaking on his mobile phone from his position halfway up the 197ft wheel, Noonan said: "This is the scariest thing I have ever done in my life. I want the police to stop harassing me, even the probation service over the last three days. They are threatening to recall me to prison." 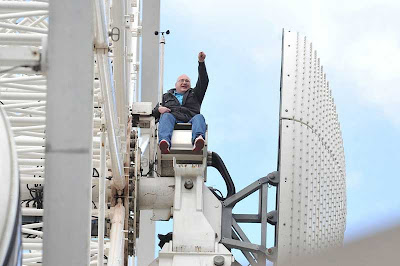 Noonan, who is on licence as part of a nine-and-a-half year sentence for hiding a gun in the bonnet of his car, said he had a 'stupid argument over the washing-up' with a friend at an address in Cheetham Hill where he is required to stay under the terms of his licence. He added that because of the argument, he went to stay at another friend's house in Stretford, which was technically a breach of his licence conditions. Noonan accepted that he will be arrested and recalled to prison as a result of his protest and added: "At least this time I have actually done something."

Cody Lachey, 30, a friend of Noonan, said at the scene: "I've spoken to him on the phone and he's planning to come down later. He's prepared. He's got a sleeping bag, chocolate, crisps and a bottle of water. He's also got insulin for his diabetes. He has spoken to his solicitors and he has been told he is likely to be charged with wasting police time and will be in court in the morning. He has proved his point, he has brought Manchester to a standstill." Members of the public who were stuck in pods when the wheel came to a halt were later released. Police officers at the scene made no attempt to scale the wheel to reach Noonan and waited for him to come down.
Posted by arbroath at 6:02 am
Email ThisBlogThis!Share to TwitterShare to Facebook