Spanish hairdresser Iris Castroverde, 30, ended up in hospital after she was bitten on the backside by a bright green and yellow snake when she went to have a pee in her bathroom. The mother-of-two Iris said: "I had just been talking to my husband on Skype. I was on my own with the children because he's away working in the Netherlands. After we finished talking I wanted to use the bathroom before watching a film on television. She said that she had just sat down on the toilet when she heard a strange noise coming from the pipes in the wall at her home in the town of Naron, in north-western Spain. 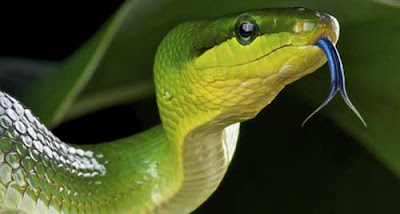 She said: "I could hear something behind the wall and I was trying to work out what it might be as I hadn't heard it before. After that everything happened really quickly, I became aware that there was something moving in the toilet bowl, then I heard a splash and then an intense pain on my backside. I stood up with the snake still hanging onto my backside but then it dropped back into the water, and disappeared back up the pipes from where it had come." Mrs Castroverde grabbed two bottles of bleach and put them down the toilet and said she was pretty certain that the snake had gone by then.

She said: "I flushed the toilet to send the bleach after it but I don't know if I got it. I guess the snake was about 30 centimetres long, and once I poured the bleach down the toilet I realised it was probably poisonous because my backside started to go numb." She said she had then called an ambulance and arranged for her husband's parents to come and look after the kids while she was taken to hospital in an ambulance where she was given several injections to counter the venom from the snake. A hospital spokesman said: "We found four incisor marks in the buttock near the perineal area, and we followed standard practice for snake bites which includes a tetanus and rabies shot as well as administering an antidote. 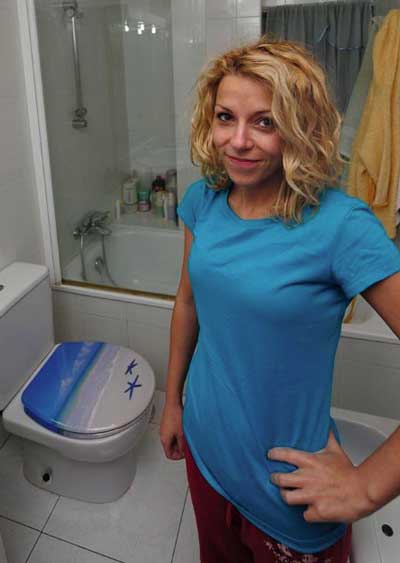 "We had to remove the poison from the wound but some of it had spread into the body and we needed to give her an injection to counter that." Police and firemen closed the block of flats where Iris lived and searched for a sign of the snake but after finding nothing allowed locals back, including kids from a kindergarten on the ground floor of the building. Iris added: "I still feel really ill from the snake bite and the injections I got at the hospital. By the time I had arrived at the hospital I couldn't move my leg at all. I was back at work after 24 hours though because there so much to do, and in any case I can't sit down at the moment."
Posted by arbroath at 6:04 am
Email ThisBlogThis!Share to TwitterShare to Facebook