Officers from Police Scotland who were deployed to investigate an apparent murder in Edinburgh caught on Google Street View discovered the cold-blooded murderer and his lifeless victim were actually a pair of mischievous mechanics. 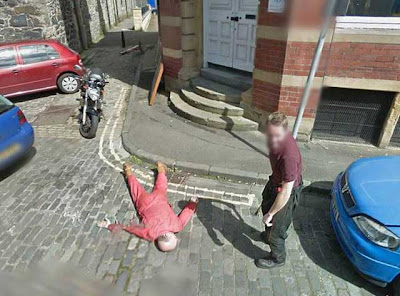 Garage boss and “murder victim” Dan Thompson, 56, who owns Tomson Motor Co in Giles Street, said he was “mortified” when uniformed officers turned up at the business to investigate reports of his death. Mr Thompson had lain on the road while his colleague Gary Kerr, a 31-year-old mechanic, stood over him with a pick axe handle after spotting the Google camera car from a distance. 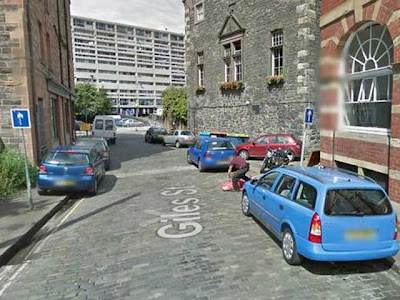 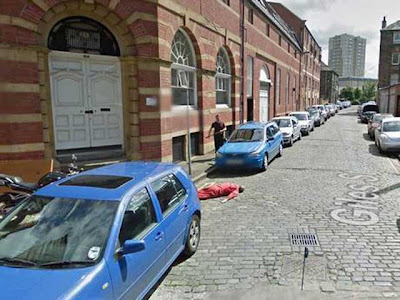 However, a web user saw the images and police were alerted. Mr Thompson said: "By complete fluke I saw the Google car coming along the road but it had to loop the block so I had one minute to rush back inside the garage and set up the murder scene. There are pictures of men on Google flashing their bums but we thought we would be more classy. 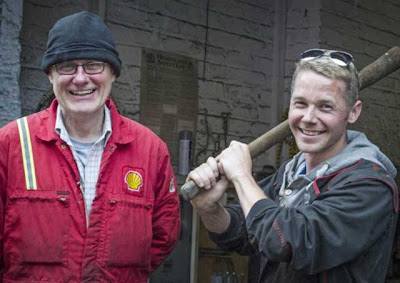 "It seemed like the obvious thing to do so I threw myself on the ground and Gary grabbed a pick-axe handle from the garage. We had forgotten about it when the police arrived a year later. Two uniformed officers came down to the garage to interview us. They were treating it seriously at first – I was mortified because we didn’t want to waste police time. We explained to the police what we had done and they thought it was hilarious.”
Posted by arbroath at 6:01 am
Email ThisBlogThis!Share to TwitterShare to Facebook

And of course I had to pull up Street View and go up and down Giles St to find it. I'm going outside now and getting a life.

I linked directly to it in the first paragraph.

It took me ages to find.

These guys should get a medal !!!!
Fantastic.