Missing cat turned up at owner's home after 13 years

A long-lost pet cat has made a sudden and unexpected return home. Paula Harper-Adams last saw her beloved moggy, Shelby, when she left the family's home in 2001 and never returned. So when a cat turned up on her front doorstep in Geelong, Australia, she thought nothing of it. 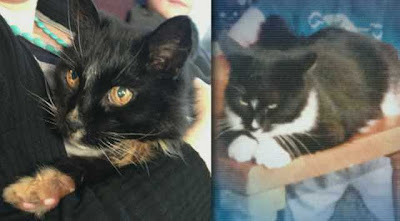 Paula initially took, what she thought was a stray, to the local vet. The cat was in poor condition, with matted fur and covered in lice. "It was standing at the vet, where I had this moment, where I thought, could it possibly be our cat that ran away 13 years ago?" Paula said. She dug out an old photo of Shelby.

She compared her cat from 2001 to the new arrival and both had the same distinct white markings. Paula returned to Bellarine Vet Clinic where staff confirmed it was, in fact, her long-lost Shelby. Veterinary nurse Ebony Deglaitis said: "When she brought the picture back in, it was spitting image."

Both Paula and veterinary staff were stunned. Clinic co-ordinator Natalie Dorain said: "For someone to find their cat after such a long time and wondering what had happened to your cat all that time, I think we all sort of felt pretty emotional about that." Paula has no idea where Shelby has been for the last 13 years, but is just overjoyed her moggy is home.
Posted by arbroath at 6:01 am
Email ThisBlogThis!Share to TwitterShare to Facebook