Mystery of sausage dog that appeared in locked car solved

A woman in western Germany got a shock when she returned to her locked car and found a strange sausage dog staring back at her from the back seat. The mysterious incident was the result of a series of unlikely coincidences.

The baffled woman, who had been attending a religious service in Adenau near Koblenz in Rhineland, immediately drove the dachshund to a nearby police station, officers said in a statement. 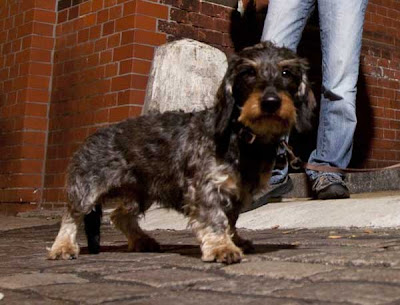 But while officers were inspecting the animal, another distressed woman came in to report her beloved dog as missing. The mystery was eventually solved. It turned out the mix up had occurred when the women had mistaken each other's identical cars for their own - which they had coincidentally parked next to each other.

"Obviously, in this rare case, the keys also fit in both cars' locks," the police said. The dog owner had got into the wrong car and left without realising her mistake. Then the other woman had returned to find the dog on the back seat.
Posted by arbroath at 6:03 am
Email ThisBlogThis!Share to TwitterShare to Facebook

I wonder what the odds are that the women would have identical cars with the same lock, and then park next to each other? Gotta be some long odds.

It's certainly no small coincidence.