Neighbours at war over bee poo

New Zealand neighbours Jenny Price and Peta McClure are at loggerheads over apiarian excrement. Legal action is under way, the police have been contacted - and there's no sign of a resolution. The problem, says Ms Price from Kumeu, 25 km north-west of Auckland, are the beehives being kept on a fruit and nut tree orchard, two properties away from her house which she says is on the insects' flight path. "Dear neighbour," Ms Price and partner Pete Sinton wrote last year. "They have caused us no end of annoyance as we have to garage our cars all the time. If we leave them outside, your bees cover our cars in excrement . . .

"Our house has it on the east side. Our barbecue tables are covered in it, plus any cushions we place on the seats. We don't put the washing on the line as all our clothes get covered in the excrement also." Price says the offending material "sets like a wax, so it's terribly hard to get off . . . It's all right when it's wet, because you can get a hose. But you never know when they're going to strike next". She confirmed that when she got no response to her original letter, she hired a lawyer, who had recently written to the property owner: "In our view, the honey bee excrement amounts to a private nuisance and it needs to cease immediately." 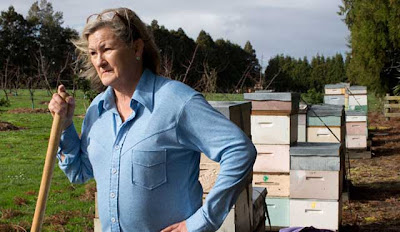 The lawyer said while his client, as a former orchardist, understood the importance of honey bees, the situation was "unreasonable, upsetting, frustrating and expensive". Orchard owner Peta McClure says between 6 and 35 hives at a time are housed on the 1-hectare orchard block she bought as bare land in 2006 and has since planted with 350 trees. "There's a fruit for every season. It was just my passionate dream." The bees arrived two years later, installed by a keeper who exports honeycomb and queens. At the height of the season, each hive houses up to 60,000 bees but, in winter, around 10,000. McClure said she was prepared to go to the small claims court over the issue and, while it would "devastate her" if the bees had to go, she would consider reducing their numbers.

"I'm very passionate about this. I'm passionate about the whole future of our food chain, and this part of our food chain. If the bees are gone, we're all out of food." McClure said, so far, she had ignored her neighbours. "The whole idea of going into the lion's den . . . " Kumeu police confirmed they had been contacted about the issue but had advised both parties they would need to "resolve it between themselves". The beekeeper operating on the Kumeu orchard said he didn't want to comment, given the issue had escalated to lawyers' letters, but, "I haven't programmed the bees so they deliberately fly to their house and drop a big load . . . I would imagine the place that cops it the most would be the orchard, where they're situated".
Posted by arbroath at 6:01 am
Email ThisBlogThis!Share to TwitterShare to Facebook

Perhaps they could sue god next, for letting the birds shit on their lawn.
A good proportion of us New Zealanders are normal.
Just so you know.