A book called Magic Australia, presented by a wounded WWII veteran to his little girl and then lost, has worked its magic across the globe and the decades to find its way back home to her. 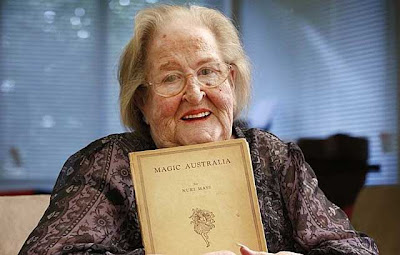 Betty Fowkes’s father, George Wardley, gave her the book as a present when she was 11, lovingly inscribing it: “To Betty, from Daddy. Christmas 1944.” Betty, now an 80-year-old great-grandmother, believes she lost the book about four years later when the family moved out of their home in the Northcote suburb of Melbourne, Australia. 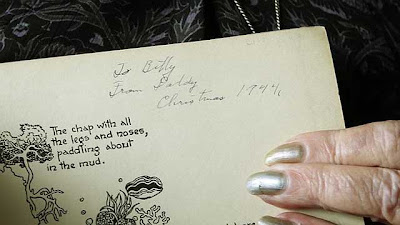 Sixty-six years later, Ms Fowkes heard the author, Nuri Mass, mentioned on a radio broadcast, and asked her daughter, Liz Crooks, to look up the book. “For some reason the name rang a bell in my addled brain,” she said. Ms Crooks started hunting for a copy online to give to her mum.

Ms Crooks tracked down five first editions around the world. On further inspection through an American seller, New York’s Austin Book Shop, she realised one was the very same book originally given to her mother. It remains a mystery how the book found its way to a small bookstore in New York.
Posted by arbroath at 6:02 am
Email ThisBlogThis!Share to TwitterShare to Facebook