A Siberian woman set fire to large haystack after falling out with a friend on social media. The woman went to her friend's yard in Transbaikal village and set a giant haystack on fire in her fury at being unfriended. She now faces up to five years in jail.

The act of revenge did not even hit the right target. The haystack didn't belong to her former friend. Konstantin Podoprigora, deputy head of the regional prosecutors office, explained: "The offended woman was banned by her friend in a popular social network. 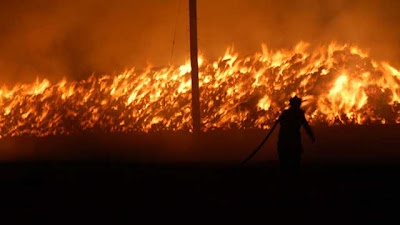 "She was put on a black list after an earlier argument. That got her even more offended to the extent that she decided to get revenge. She went to her friend's house, set a stack of hay on fire and ran away. The revenge hasn't actually worked because it was somebody else's hay left in her friend's yard.

"The losses were significant to the owner of the hay. The Transbaikal prosecutors initiated an arson case and sent documents to the court. If the women is found guilty of the arson, the toughest punishment she might serve is five years in jail, according to clause 167 of the Russian Criminal Code".
Posted by arbroath at 6:03 am
Email ThisBlogThis!Share to TwitterShare to Facebook