Aggressive tortoise shot dead after attacking policeman at his home

A police officer in Uganda has shot a tortoise dead after being attacked by the aggressive creature at his home. Charles Onegiu, who is attached to Ndew Police Post in Ndew sub-county, Nebbi district, says he was in his grass-thatched hut sipping on a cup of tea when the incident happened. The tortoise crept in and when Onegiu tried to scare it off, the hard-shelled creature appeared unfazed, and instead turned aggressive. The policeman, who had just returned home after a long field day training crime preventers, tried to wave off his unwanted visitor.

“I tried to scare it but the tortoise became very aggressive. I took a stick to chase it but it instead became more violent making me to make alarm. I immediately picked a plastic chair to hit it. It then got out of the hut and moved towards the latrine as people rushed to my rescue,” he said. The shaken Onegiu then instinctively reached for his firearm and shot the fleeing reptile dead. “When it came out, I reached for my gun and shot it dead. It was a very big white tortoise. As I talk now, I am still scared because it is the first time I have seen such an incident happen in my life or heard of one,” he said. 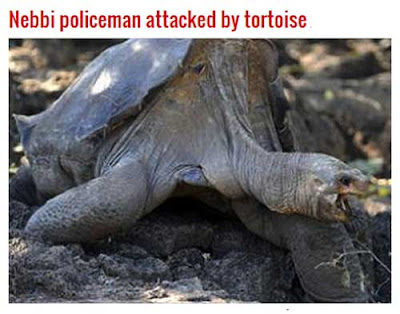 “It was a wonderful morning for me after training the crime preventers for the sub-county on the basics of their jobs. Little did I know that a different chapter awaited me later at home,” he spoke of the unusual happening. The incident left him traumatized and “stressed” and he felt like leaving his work station but consolation and encouragement from his colleagues, family and friends made him stay. He had called his boss, Onesmus Mwesigwa, who is the Nebbi district police commander (DPC), and told him about the incident. He then requested him to allow him leave his work station. “But he consoled me and advised me to keep on duty,” said Onegiu, adding, “My father also came to talk and consoled me about the incident, but I’m still scared.”

Drawing reference from his experience, the policeman advised people to always be on the look-out for any kind of danger. After Onegiu had killed the tortoise, a group of people belonging to the Charismatic faith prayed for him, before burning the dead reptile to ashes. When contacted for a comment on the incident, Nebbi DPC Onesmus Mwesigwa burst into laughter and went about how Onegiu had called him, telling him what had happened. “Yes, I got that report because Onegiu called me and narrated how the tortoise came to his house and tried to grab his legs. As, you know in the villages, there is a lot of superstitions where people think ‘somebody is after me’. But, we consulted with some elders and his colleagues.” The police boss called for calm from the residents and police officers, maintaining that their lives are not in danger as they may have assumed.
Posted by arbroath at 6:01 am
Email ThisBlogThis!Share to TwitterShare to Facebook

"The fleeing tortoise" provokes quite an image.