When fisherman Liam Mårskon reeled in an eight-kilo pike, he discovered that it had a half-eaten sausage complete with packaging in its belly. The 20-year-old from northern Sweden was out fishing in Härjedalsfjällen with his friends over the weekend when he made the unlikely discovery. "We saw this really big pike but for some reason it just didn't want to bite onto the hook. 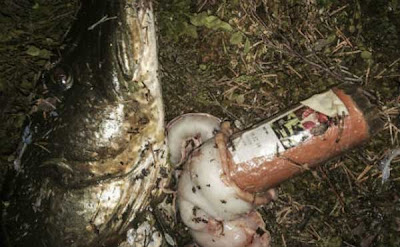 "Normally pikes are quiet aggressive but this one was acting strange," Mårskon said. After a few hours the young fishing enthusiasts spotted the pike again and decided to make a move. But they noticed something unusual when reeling in their catch of the day. "The shape of the fish was strange. It looked a bit like a cylinder and one of my friends said for a laugh, 'there's a sausage in there,' but it turned out it was right," laughed Mårskon.

The fishing friends said the pike was behaving weirdly and appeared to be in pain, so they killed it and cut the fish open where the sausage was discovered. "I just couldn't believe my eyes. Inside the pike was a half-eaten sausage still in the plastic wrapper. Somebody must have thrown it away and the fish must have been very hungry." 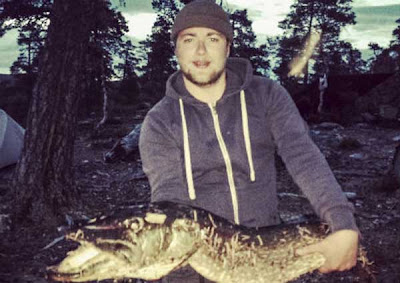 "The expiry date was for December 1st this year so it can't have been inside the fish for very long," he said. The sausage appeared to be a falukorv, long a staple part of every Swedish child's diet, normally served with rice and creamy red sauce. "We didn't eat it," Mårskon said. "It smelled a bit bad as it had been inside a fish's stomach so we threw it away. I've been fishing there all my life and my family has been going there since 1986 and never seen anything like it," he added.
Posted by arbroath at 6:01 am
Email ThisBlogThis!Share to TwitterShare to Facebook