For a brief time on Thursday and Friday the parking regulation signs outside Linwood E. Howe Elementary School in Culver City, California, topped 15 feet. The signs were meant to clarify a new drop-off and pick-up procedure for when classes resume at the school. 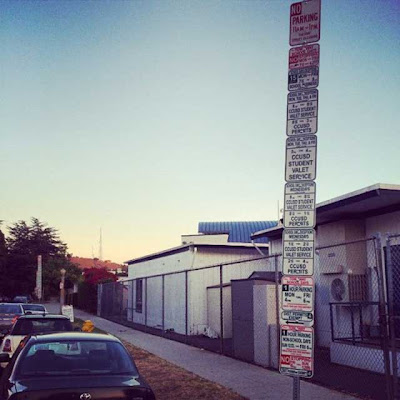 But people found them confusing. Mayor Meghan Sahli-Wells said the plan was for the signs to only be displayed temporarily. “They just didn’t look temporary,” she said. “So they were going to be taken down. And it looked like … whoa. It was pretty impressive.” By late on Friday, half of the signs were gone, although that still left more than a few regulations for spaces near the school. 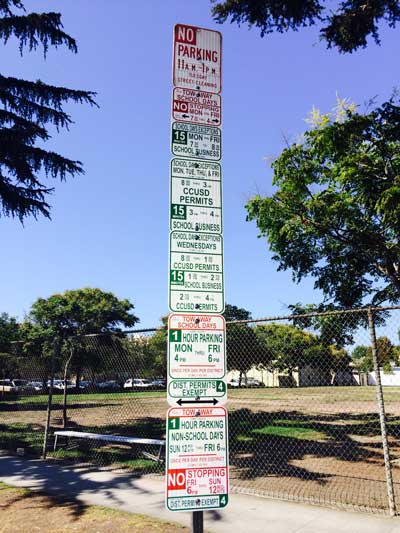 Culver City resident John Ikuma said parking near the school is at a premium. “There’s nowhere for the teachers to park,” said Ikuma. “And then we also have restaurants down the street. We had permits put in about three years ago, four years ago, and that’s helped. But this is a whole new level.”

Parent Donna Thorn said parking tickets in the area can cost as much as $73. “As it is it’s already hard to get your child to school on time, now we have to stop, look, read the sign,” Thorn said. “And then I like to help out in the morning, so I really have to read these signs so I don’t get a ticket. Because it’s common over here.”
Posted by arbroath at 6:05 am
Email ThisBlogThis!Share to TwitterShare to Facebook

Only the moronic logic of local government could have achieved this level of bovine stupidity.

Honestly, I find this style of traffic signage totally retarded. Who can read that without actually stopping (and potentially violating the regulation)?

In Europe you will have a "No Stopping/Parking" sign with a small plate saying something like "Except permit holders". And then the city/school distributes the permits (usually a paper card) to their staff who are allowed to park there.

If it is in front of a school or some other place where one needs to drop passengers off (airports, stations, etc.), you will have e.g. a 3-5 minutes exception for that where short parking is permitted.

Easy, simple and unambiguous. The stack above serves only to hand out more traffic tickets, nothing more.

Needs an electronic sign stating the current and near-term rules.

They need to look at this design challenge for parking signs:
http://www.gizmag.com/better-parking-signs-nikki-sylianteng/32970/