Plans to open up a funeral parlour opposite a block of retirement flats have been described as "insensitive". Proposals have been put forward by Adam & Greenwood funeral directors for a parlour on High Street in Maldon, Essex. Elderly people who live at the back of the building said they were distressed by the thought of having to see hearses and bodies coming and going.

The company said it would not be seeking alternative premises. Brian Stewart lives on the top floor of the retirement block. "When I look out of my windows, I look directly at this proposed funeral parlour," he said. "To think about it is so depressing. My wife died in January and I'm having to get over that. But then to be faced with looking at a funeral home... it's just not on." 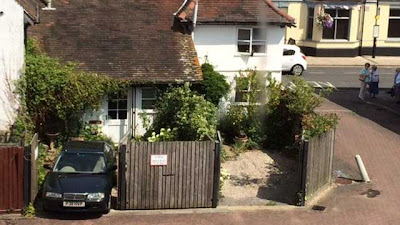 Another resident, who did not want to be named, said: "To me, it's just totally insensitive. The people who live here, they don't need to see this. We're just hoping and praying something will be done to make sure this doesn't actually go ahead." Ray Ward, from Adam & Greenwood funeral directors, said he wished those concerned had spoken to him before he signed up to buy the premises.

"The strength of feeling has come as a surprise," he said. But he is adamant the parlour will go ahead, because the company has a new contract to provide out-of-hours funeral services in the Chelmsford and Maldon district areas. "My contract says I have to pick people up within an hour and the base in Maldon will allow us to do that," he said. "If the planners turn me down, I will go to appeal."
Posted by arbroath at 6:00 am
Email ThisBlogThis!Share to TwitterShare to Facebook

Insensitive? Hell, it would be convenience. The members of the retirement community would be able to walk across the street for services instead of spending money on cab fare. Retirees are generally more crusty than given credit for. And have some delicious gallows humor jokes as well.

Next step, no retirement homes with a view of a graveyard and unmarked ambulances!
Jeez, it's not like the funeral parlour is going to put coffins in the window with "Buy one get one free" signs.

I hope the road this is on is St Peter's Close.

In England, if someone honestly and truly had a way to cure cancer, end famine, stop war and get all religions to live together in peace and harmony...but they needed to close a road for 5mins no one would agree. They'd say "but what if I need to get out?" or "I pay road tax to use the road whenever I want!". I hate living here...and if I could leave, I would.