Teenager addicted to snake venom arrested for possession of cannabis

A teenager arrested by an Excise team in Kerala, south India on Sunday with 50 grams of cannabis (ganja) has admitted to taking snakebites regularly for getting a high. Excise Circle Inspector B. Suresh who led the team said that 19-year-old Mahinshah, from Keralapuram on the outskirts of Kollam city, regularly travelled to Irumbanam in Ernakulam to get the kick from snake venom.

Mahinshah went for snake venom whenever he felt that cannabis was not providing him the required high. For each bite he paid amounts ranging from Rs. 1,000 (£10, $17) to Rs. 2,500 (£25, $42). He told the Excise officers that it was a small snake that remained comfortably coiled in a 200 ml bottle. The snake bites when it is softly pressed. The bite was administered under the tongue. He said its effects lasted for five to six days. 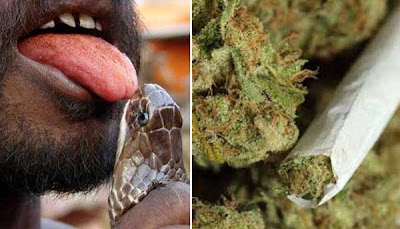 Mr. Suresh said that the owner of the snake has been identified and would be arrested soon. The species of the snake used has not identified. But given its description it is suspected to be from the drysdalia species of the elapid family of venomous snakes. Mr. Suresh said the disclosure by Mahinshah showed that many who had been abusing narcotic substances for years could be moving over to snake venom to get a high.

For a long time there have been reports that a section of snake-catchers are trading in snake venom. The reports also say that the venom which is ‘milked’ from snakes could reach the drug cartels that dilute it and sell as narcotic substances for the addicts. Mahinshah allegedly confessed that he got in touch with the snake owner after searching the internet for ways to get new highs. He will soon be appearing before magistrates in court.
Posted by arbroath at 6:02 am
Email ThisBlogThis!Share to TwitterShare to Facebook

I used to write essays using advices from https://eduessayhelper.org/blog/poetry-analysis-essay.It was really helpful so I managed to get a high grade.