A teenager's summer holiday was ruined when semi-permanent false eyelashes caused her eyelids to swell up. Lucy Taylor Pease, 19, of Bexleyheath, south east London, had the beauty treatment done at Perfect Eyebrows at Broadway Shopping Centre, Bexleyheath in preparation for a girly week away to Magaluf with a friend. But just hours after having the eyelashes stuck on, she woke up at 3am unable to open her eyes. 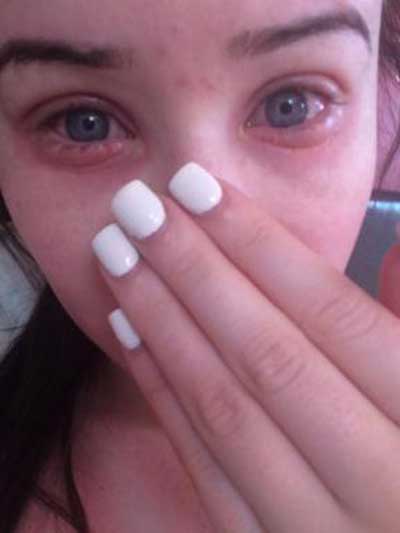 Miss Taylor Pease said: "It took me half-an-hour to open my eyes. It was so painful. I had to physically prise my eyelids apart. My first thought was that I wouldn't be able to go on the holiday - we had been planning it for a year." Miss Taylor Pease went back to the store to have the eyelashes, which cost £20, removed and received a refund. She added: "The woman said she had never seen anything like it but she wasn't apologetic."

The angry teenager was prescribed eye drops, antibiotics and steroids by a doctor who said she had had an allergic reaction to the eyelash glue but claims the incident ruined her holiday. She said: "It did ruin the holiday - I would had such a better time if it hadn't happened. I didn't really want to be out clubbing, I couldn't go in the pool and the sun made my eyes really sore. It also destroyed my confidence. 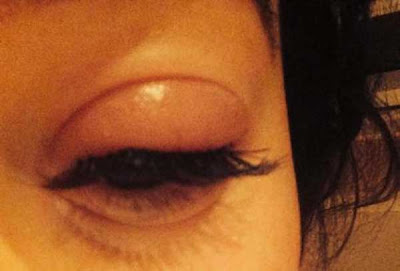 "If I'd have had a broken arm then that would have been really awful but when it's on your face you don't even want to be outside." Rekha Sachdev, owner of Perfect Eyebrows, said: “We are disappointed to hear Lucy was not happy and that is why we refunded her money in full at the time. Our well trained staff follow strict procedures and always ask customers about any possible allergies before applying the eyelash glue. Lucy has visited our stand on several occasions and we have never had cause to believe she has been unhappy with the service in the past or had any reaction to the eyelash glue we use.”
Posted by arbroath at 6:02 am
Email ThisBlogThis!Share to TwitterShare to Facebook

When I was a teenager, I once had an allergic reaction to a new face wash solution. My face swelled up like a balloon and itched like crazy. I didn't need antibiotics or steroids, not using the product anymore plus my regular antihistamins for my pollen allergy and some soothing cream did the job. My confidence wasn't destroyed, nor did I think the manufacturer of the product should be apologetic. I didn't even go to the store to get my money back, since my allergic reaction wasn't their fault.

I once used Avon's Skin So Soft as a midge repellent when I went on holiday, I had an allergic reaction to it and came out in a lot of red spots all over my face. So I washed it off and didn't use it again. The spots disappeared a day or so later. My confidence wasn't destroyed and my holiday wasn't ruined, maybe one day slightly spoiled. I didn't request a refund either :-)