Tortoises have learned how to use touchscreens

Touchscreen technology has ventured into the world of reptiles. Red-footed tortoises have learned how to use the devise in exchange for a strawberry, a new study reports. Researchers taught the tortoises a few touchscreen basics in order to learn about the animals' navigational techniques. The tortoises not only mastered the task in exchange for strawberries, but the animals also transferred their knowledge to a real-life setting. "Generally people see reptiles as inert, stupid and unresponsive," said Anna Wilkinson, one of the study's lead researchers and a senior lecturer of animal cognition at the University of Lincoln in England. "I would like people to see that there is something much more complex going on." 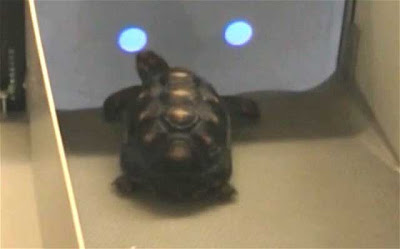 Red-footed tortoises are inquisitive and eager to eat treats, making them good test subjects, Wilkinson said. The tortoises, which are native to Central and South America, don't have a hippocampus, an area of the brain associated with learning, memory and spatial navigation, Wilkinson said. Instead, red-footed tortoises may rely on an area of the brain called the medial cortex, an area associated with complex cognitive behaviour and decision making in people. To understand how tortoises learn, the researchers tested how the reptiles relied on cues to get around. Wilkinson's colleagues at the University of Vienna gave the tortoises treats when the reptiles looked at, approached and then pecked on the screen.

The four red-footed tortoises in the study learned how to use touchscreens fairly quickly, Wilkinson said. "It's comparable to the speed with which the pigeons and rats do it," Wilkinson said. "I've trained dogs to use a touchscreen and I'd say the tortoises are faster." Their speedy learning is in line with the fact that tortoise hatchlings don't receive parental care, so they have to learn how to make decisions about food and shelter for themselves from the moment they hatch, she added. In the main experiment, the tortoises pecked a red triangle in the centre of the touchscreen. When two blue circles flashed, they had to consistently peck either the circle on the right or the one on the left to get a treat.

All four of the tortoises mastered the touchscreen task, but two eventually stopped cooperating, possibly because they were too small to properly reach the screen, Wilkinson said. The remaining two tortoises applied their knowledge to a real-life situation in the next part of the experiment, Wilkinson said. The researchers placed them in an arena with two blue empty food bowls that looked like the blue circles on the touchscreen. The tortoises went to the bowl on the same side as the circles they were trained to peck on the screen. However, it's possible that the tortoises weren't transferring knowledge, but simply had a preferred side, said Jennifer Vonk, an associate professor of psychology at Oakland University in Michigan, who was not involved with the study. The researchers trained the tortoises to go to the opposite bowl in the arena to see how flexible they were, but once reintroduced to the touch screens three months later, the tortoises immediately began pecking on the same side as before.
Posted by arbroath at 6:02 am
Email ThisBlogThis!Share to TwitterShare to Facebook