A homeowner has been blocked from officially registering his house under a new name because it was "potentially offensive". Daniel Lewis, of Milton Road, Clapham in Bedfordshire, wanted his post to be addressed to "Hardcore Mansions" instead of his house number.

He said he chose it because the name reminded him of nights out in his younger days. Bedford Borough Council refused, saying the proposed name was "inappropriate". Mr Lewis said he wanted to call his house Hardcore Mansions because it reminded of when he was "out on the town" in his 20s and "giving it large". 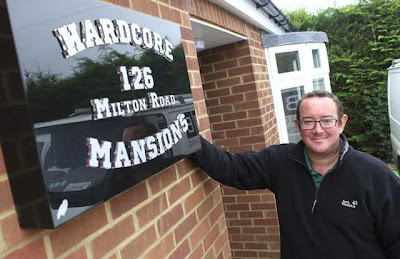 "Hardcore Mansions was [the name we used to call] our friend's house," he said. He wanted to be able to have his post officially addressed to the house name and the street name rather than having to use the number of the house. "You have to apply to the council to get that done... [but] they refused on two separate occasions," he said.

"They said it was inappropriate and could be offensive. I did write to them and outline there was a number of different meanings to hardcore but they just took it down the sexual route and told me I couldn't have it." Mr Lewis has now put up a neon sign depicting the name and said he has no plans to remove it. He said his neighbours "all think it's quite amusing".
Posted by arbroath at 6:00 am
Email ThisBlogThis!Share to TwitterShare to Facebook