Hungarian police have arrested a 35-year-old amateur gardener who was growing a floating cannabis plantation on Lake Neusiedl, on the Austrian border.

Police found a total of 42 potted cannabis plants that were well hidden in a patch of dense reeds. The owner was due to harvest the buds in a few weeks. 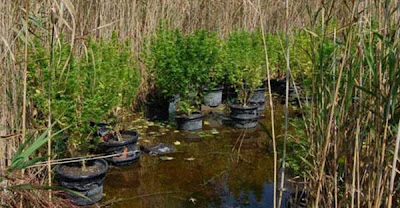 The police stumbled upon the plants by accident, which were growing on the border of Burgenland and Hungary.

The gardener, who is also a keen angler and spends a lot of time at the lake, said that he bought the seeds in Austria and was growing the plants for his own use. If police can prove that he was selling the drug he could face up to eight years in a Hungarian prison.
Posted by arbroath at 6:03 am
Email ThisBlogThis!Share to TwitterShare to Facebook

I don't partake myself, but I wonder why it is illegal and alcohol is not.
That is about as sane as the Muslim countries banning alcohol.