A man in a wheelchair was arrested after allegedly robbing a K-mart in Chula Vista and leading police on a chase before he was finally subdued by a police dog in the parking lot of the downtown San Diego Police headquarters. Michael Alan Hanby, 29, who identified himself as an unemployed security guard, was booked into county jail on suspicion of burglary, evading arrest and various weapons charges. 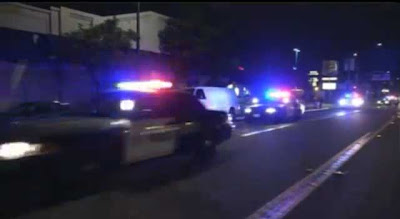 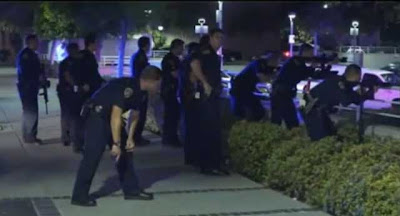 He is being held at San Diego Central Jail without bail pending arraignment. The incident began at about 9:30pm on Tuesday at the K-mart. According to police, the man stole items from the store and was then confronted by a K-Mart employee in the parking lot, where he allegedly pulled a gun, then fled in a maroon van with handicap plates. Later, a Chula Vista police lieutenant saw the suspect’s van. The lieutenant radioed in the sighting and officers attempted to stop the van in San Diego, but the suspect refused to pull over, according to police. 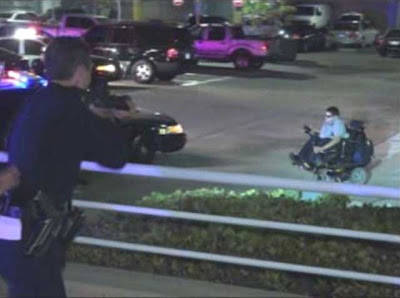 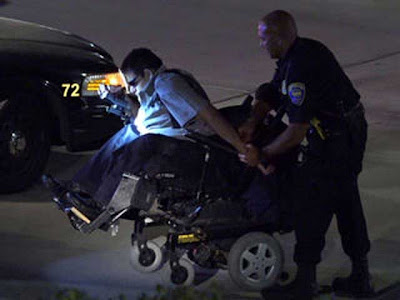 The suspect then led pursuing Chula Vista officers on lengthy chase through parts of San Diego. Officers from San Diego tried to stop the van by putting down spike strips, which the suspect apparently avoided. A helicopter also was called in to assist in the pursuit. The chase finally ended in the parking lot of the San Diego Police Department near downtown San Diego, according to Chula Vista Police. The suspect stopped and exited the van in a wheelchair. Police said he refused to follow commands to surrender.

Believing he may have been armed with two handguns, officers deployed a police dog, which subdued the suspect, who was taken into custody about an hour after the K-mart theft. The suspect allegedly was armed with a revolver and a .40- calibre pistol in a shoulder holster. A 12-inch knife was in the wheelchair, along with a backpack containing a .44 Magnum handgun, handcuffs, pepper spray and brass knuckles. All the guns were loaded, and officers impounded extra ammunition. In the van, which was outfitted with hand-operated brakes and accelerator, police recovered masks, an 11-inch knife, 18-inch machete, a baseball bat and a bail bondsman’s badge.
Posted by arbroath at 6:06 am
Email ThisBlogThis!Share to TwitterShare to Facebook