A naked man shocked customers at a shopping centre in Darwin, Australia. The butt-naked gentleman was spotted casually strolling through Casuarina Square on Saturday afternoon.

On-looker Dee Smith said he was a sight to behold as he walked through the area at around 3.30pm. “It was hilarious,” she said. “We were at the Coffee Club having a cuppa when this guy strolls past very calmly, he didn’t look stressed whatsoever.” 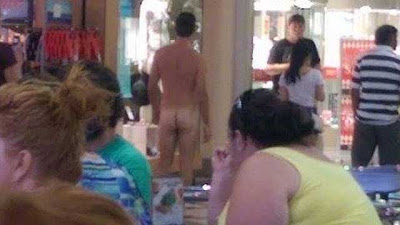 The reason for the cheeky appearance hasn’t been discovered but Ms Smith thought the man must have been put up to it by mates. “It was probably a dare, or he just likes to get naked,” she said. Reactions from other patrons were a mixed bag.

“We cracked up with laughter, there were a couple of shocked looks from the people sitting near us, a couple of 15 year old girls were screaming,” she continued. “It was a bit of an eye-opener.” But the man's display didn’t last for long. “Security came through with mean looks on their face so he got out of their pretty quickly,” Ms Smith said. The man evaded capture and was long gone by the time police arrived at the scene.
Posted by arbroath at 6:02 am
Email ThisBlogThis!Share to TwitterShare to Facebook