At the Mid-South Sawmilling lumber yard in West Tennessee, there was a cut of wood that jumped out to owner Daniel Turbeville. He said he saw something sacred as he was working and cutting slabs. 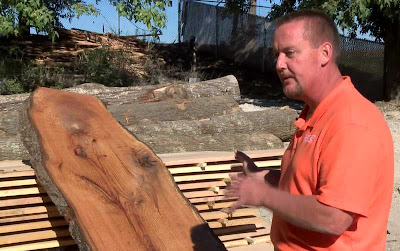 "Talking to a couple of people that work with me," Turbeville said, "We kind of decided that looked like the depiction of Christ as we know it." The Millington lumber yard salvages wood from around the city and tries to make something constructive out of the timber.

On this particular tree trunk, there is a grain pattern that makes the piece pious, Turbeville says. "About 70 percent of the people I ask agree that it looks like the image of Christ," he said. 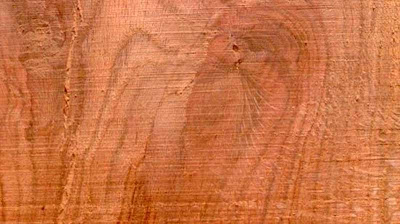 Turbeville is not yet sure of what he will do with the discovery, but he hopes that the timber could find a home in a place where its significance could be appreciated. "If somebody wanted it I would sell it, but I do think it would be best served if it were in a church or it'd be nice in a pastor's office," he said.

Bit of Danish oil would really lift the grain. As for Jebus? Where?

I can't see anything, not even Charles Manson.

Mind you, Duncan at Mad Hatters seems to have solved it ...

That was great, arbroath. I see nothing in this picture except for wood. I'm "amazed" that he's willing to sell it. And the other 70%? They were drunk.

I was looking more at the at the cat face over the suspected area of Jesus's head. That is a cat in a robe, possibly wearing a backwards baseball hat.

"at the at the cat face"

Yeah.. I'm normally really good at picking out images in stuff but, for once, I've got nothin' here either.

Congratulations "Bubba", you found a knot in a piece of wood. Only in America are they moronic enough to think otherwise

i c Voldemort there :D