A quick-thinking woman from Melbourne, Australia, has saved her dog from a vicious attack in a rather unconventional way. Ann Bendouli was walking her dog Lexie along Hampton Beach when a Staffordshire terrier ran up and attacked the one-year-old Jack Russell, latching onto her side and shaking her. 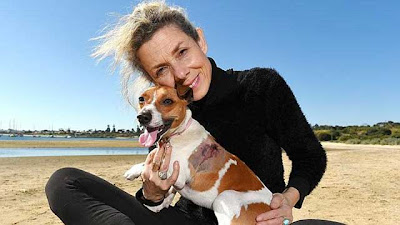 "She's my soulmate, and I love her so much and I was so glad she was actually saved," she said. Ms Bendouli she had previously witnessed a fatal dog attack and had researched an intervention method should it ever happen again. "It said if you have a lighter, put it onto its bottom," she said.

However, Ms Bendouli didn't have a lighter so she did the first thing that came to mind, with the tools at hand, so to speak. "I pulled the tail up and stuck it right up to that knuckle," she said. The staffy was apparently in so much shock by the manoeuvre that it immediately let the wounded Jack Russell go. Lexie required more than ten stitches after the incident, which Ann wants the owner of the staffy to pay for.

The staffy's owner Barbara was also injured in the attack, requiring plastic surgery after the tip of her toe was torn off while trying to separate the two dogs. Bayside City Council said regardless of whether the dogs were allowed to be off leashes or not, the staffy owner has an obligation to keep her dog under control. Council investigators are taking statements from witnesses to the horrifying attack.
Posted by arbroath at 6:05 am
Email ThisBlogThis!Share to TwitterShare to Facebook