Alleged thief rescued after being stuck in chimney for 12 hours

An alleged thief trying to rob a roadhouse in Australia's outback became stuck in a chimney for almost 12 hours and needed rescuing. Staff at the Mount Ebenezer roadhouse on the Lasseter Highway in the Northern Territory were opening for business early on Friday when they heard a voice calling out from somewhere inside the building. 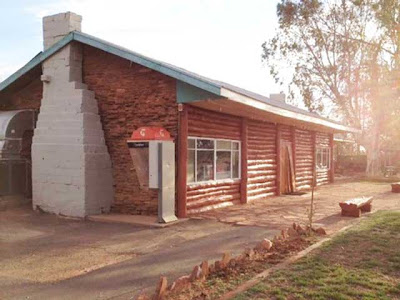 Roadhouse all-rounder Kevin ‘Chevy’ Carter arrived at 7am to open the business, when he heard the voice yelling for help. “It scared the sh*t out of me,” Mr Carter said. He called emergency services in Yulara and offered the man a bite to eat. “You could see his hand so I passed him up a sausage roll and a bottle of water, and I asked him, ‘how you gonna pay for that, with cash or card?’ A couple of minutes later a wrapper and an empty bottle came down.”

Senior Sergeant Garry Smith said: "Once inside the chimney he has slid uncontrolled down to the bottom of the chimney where he has become wedged as the chimney narrows just above the fireplace itself. Looking from the fireplace up, there is a small gap of around 10cm to allow smoke to escape, above this the chimney proper begins and this is where he stuck, unable to move in an area barely big enough for his body to fit." 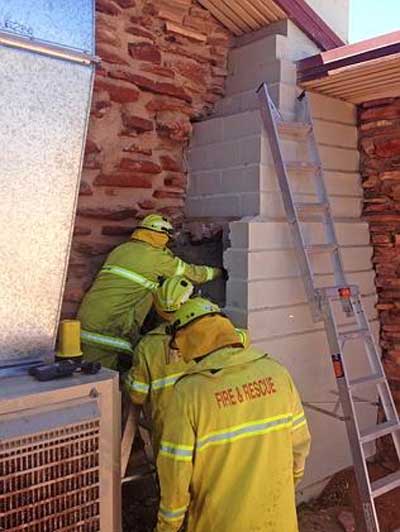 Police from Yulara and Imanpa stations attended but had to wait for a fire and rescue crew from Yulara, about 190 kilometres away, to arrive before the rescue could begin. A jackhammer was used for about 90 minutes to create a hole alongside the man. "He seemed remarkably well considering the ordeal he had just been through," Sen Sgt Smith said. "He was treated for scratches, ash and dust inhalation." He said the man was taken to Imanpa Health Clinic and will be interviewed when given the all-clear by doctors.
Posted by arbroath at 6:03 am
Email ThisBlogThis!Share to TwitterShare to Facebook