Cat tracked down owner who had moved into nursing home

Staff at a care home in Westcott, Surrey, have been left amazed after realising that a persistent feline they thought was just a stray begging for food was actually seeking her former owner, who had moved into the home. Cleo the cat was picked up by Nancy Cowen as a stray in Richmond, before the pair moved to Wescott eight years ago.

But when Mrs Cowen moved into Bramley House care home in the village eight weeks ago, Cleo was left in the care of her former neighbours. But it seems the loyal four-legged friend had other ideas. Bramley House employee Laura Costello said: "About two weeks after Nancy moved in this cat just started turning up and sleeping on the benches outside the home. It was very strange." 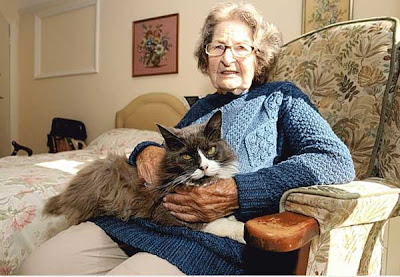 The true identity of the care home's newest resident did not become clear for another two weeks. Carer Ms Costello continued: "One of the other carers picked her up one day and Nancy said 'That cat looks like my cat'. Then she said 'But my cat lost part of her tail in a traffic accident'. The carer looked at the cat she was holding and realised part of its tail was missing.

"Then Nancy's sister came round and said she definitely was Cleo." The happy pair have now been officially reunited, with Bramley House able to cater for the contented feline and keep her in her beloved owner's company. The pet-friendly facility has also pledged to give Cleo a home for as long as she needs one in the future. Fiona Collins, who also works at the home, added: "I have no idea how she's found her. It's quite spooky in a way."
Posted by arbroath at 6:00 am
Email ThisBlogThis!Share to TwitterShare to Facebook