Police used patrol units, dogs and helicopters to catch man who had snatched pack of cigarettes

An 18-year-old man was arrested in Florida on Tuesday morning on charges of stealing a $4 pack of cigarettes, according to the Manatee County Sheriff's Office.

The 43-year-old victim was in a parking lot in Bradenton at 9:11am when Shaquielle Olmeda ran by and snatched a pack of cigarettes out of the victim's hand. 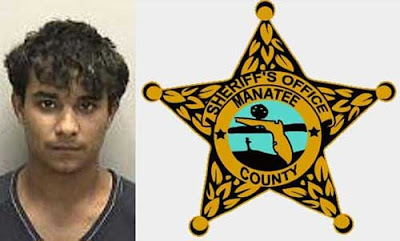 Olmeda ran off and the victim called law enforcement. Deputies used patrol units, dogs and helicopters to set up a perimeter, and eventually found Olmeda in the east parking lot of Magic Mile Plaza.

The victim positively identified Olmeda and the pack of cigarettes was located on his person, deputies said. Olmeda was arrested without further incident.
Posted by arbroath at 6:06 am
Email ThisBlogThis!Share to TwitterShare to Facebook

Pretty soon, stealing a pack of cigarettes will be considered a felony if the prices keep rising.

Yes, they do. Fresh off the plane in Auckland I went to buy what I assumed would be a $5 bag of Drum tobacco and was told, “Thirty-three dollars.”

Went to another shop, had the same thing happen. Now I figured, “These New Zealanders…” and some pretty unpleasant thoughts followed.

Went to the third shop and was told the same price, and WTF, “Why??”

Tax incentives not to smoke and also pay for your silly ass when you get cancer. So fair enough.

Gee, I wonder what the police reaction would be in Florida to a serious crime?