Police officers in Collier, Florida, say a man who stole a chicken wing from another diner was knocked out when another patron threw a pool ball at his head.

His friend, who was also involved in the ensuing brawl, had to be flown to the hospital for serious injuries after he was stabbed.   Deputies arrested Amaury Perez, 28, of East Naples, on Tuesday. 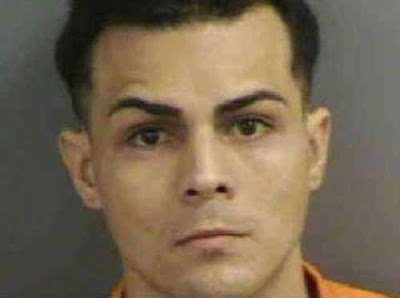 According to reports, Perez and four others were at Bowland Beacon on Sept. 28 when they noticed people at another table were calling them names.   One of the victims walked by Perez and his friends and took a chicken wing off of their table.  Perez and his friends threw a pool ball at a man who fell unconscious.

The group then beat up a second victim and stabbed him in the leg and abdomen.   Number plates from the suspects’ car were recorded as they fled the bowling alley. Deputies later tracked them to Perez, who is the only one to be arrested in the incident so far.
Posted by arbroath at 6:06 am
Email ThisBlogThis!Share to TwitterShare to Facebook