A terrified woman called the Scottish SPCA after finding a stray snake, only to discover it was made of rubber. They were alerted after a member of the public spotted the two and a half foot long creature on Glasgow's Claremont Street.

When Senior Inspector Billy Linton arrived he was amused to find a toy snake. Billy said, "The woman had put a cardboard box over the 'snake' to contain it and I lifted it with caution as I expected the snake to be moving. 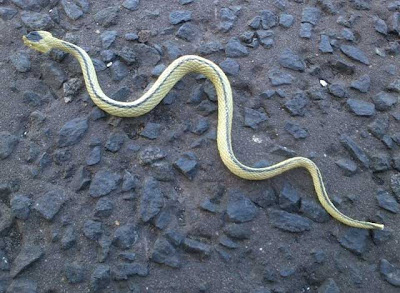 "However, I soon realised it was made of rubber. The toy is quite lifelike so I can understand why the woman was fooled. She genuinely thought it was real and was very frightened.

"Many of the incidents I attend involve injured and neglected animals, so this was a bit of light hearted relief and it certainly put a smile on my face. While this particular rescue turned out to be a false alarm, we'd still always encourage anyone with concerns for an animal to contact us."
Posted by arbroath at 6:03 am
Email ThisBlogThis!Share to TwitterShare to Facebook