A grieving woman who dug up her dead husband and dumped his coffin by the side of a road before trying to smuggle his corpse across a border is facing jail. Widow Verica Zunjic, 60, had driven 230 miles from her home town of Doboj in Bosnia and Herzegovina to neighbouring country Montenegro where her husband Milorad, 60, had been buried in his family plot in the town of Danilovgrad.

She then sneaked into the graveyard and exhumed his body by digging him up herself and stuffing the coffin in her hatchback and heading for the border. But she was stopped after motorists spotted her when she pulled over to open the coffin and put her husband's body in the car, leaving the coffin itself behind. 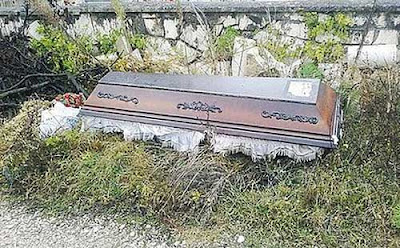 She said she had not managed to close the boot and thought it would look suspicious when she drove over the border, so she had laid her husband on the back seat, and hoped to tell border officials he was having a rest. But a police patrol who were alerted to the abandoned coffin stopped her after getting the complaint from another motorist and looking at CCTV footage to identify her.

She was pulled over a few miles away where they found her husband’s remains in the boot of her car. A police spokesman said: "When officers stopped her she denied any wrong-doing and said she was just taking what was rightfully hers. She had fallen out with her late husband’s family and wanted his remains buried close to where she lives. Unfortunately, exhuming a corpse without official permission is illegal, no matter what the reasons."
Posted by arbroath at 6:04 am
Email ThisBlogThis!Share to TwitterShare to Facebook