Man rescued from store's walls after being trapped for three days

A man trapped for three days between two walls of a business in Longmont, Colorado, unsuccessfully attempted to pass distress notes outside. One of them was written on his probation officer's business card. "You can't make this stuff up," Longmont police Sgt. Cage said. 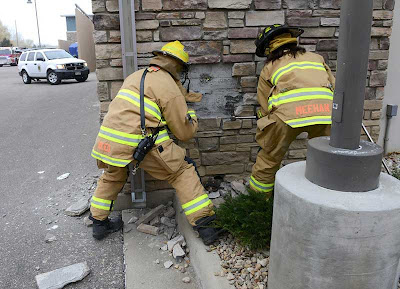 The Longmont Fire Department spent about a half hour on Tuesday morning freeing Paul Felyk from a vacant space between interior and exterior walls at the Marshalls Store, eventually employing a K-12 saw and cutting a large hole in the side of the building. Marshalls employees told police that they had heard a man yelling on Monday but didn't know where he was. On Tuesday, they again heard the man yelling and determined he was yelling through a hole in a back wall. 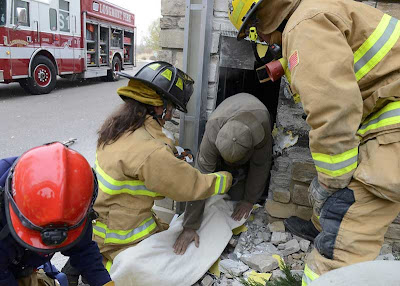 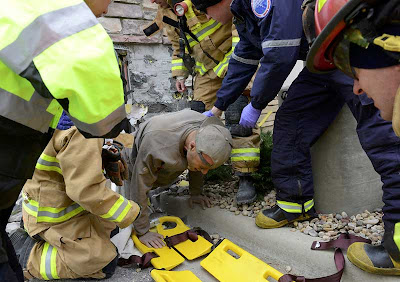 He sounded like he was in pain, and a manager called police. Cage said Felyk was unable to push the notes under the interior wall, and they were later found by first responders. "They were hard to read, but they definitely said 'help,'" Cage said, adding that Felyk, 35, had ineffectively attempted to describe his position inside the building in one of the notes. "I'm not sure he knew where he was," Cage said. Felyk dated one of the notes Nov. 8, leading police to believe that he had been stuck in between the walls since Saturday.

After firefighters opened the hold in the exterior wall, Felyk crawled out, lay down on a gurney and was whisked away to Longmont United Hospital. Cage said the incident is being investigated as a possible burglary or trespassing and that charges are pending. Felyk, who has so far not been charged with any crime in relation to the incident, has prior convictions for robbery, trespassing, assault, driving while ability impaired, theft and criminal mischief.
Posted by arbroath at 6:07 am
Email ThisBlogThis!Share to TwitterShare to Facebook