Police, fire and humane agents helped rescue dog that had been on house roof for three days

Mahoning County Deputy Dog Warden Dave Nelson said a dog that was rescued from the roof of a house in Youngstown, Ohio, is doing better. Police, fire and humane agents were called to the East Side on Saturday to get the dog off the roof of the house. 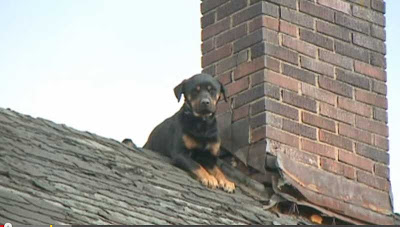 According to police, the resident, D’Andre Berger, had been staying at a friend’s house since earlier in the week when the home was broken into. Berger told police that he assumed the dog, a Rottweiler named Isis , either escaped during the break-in or was taken. What it had actually done, though, was climb through a hole in the roof. 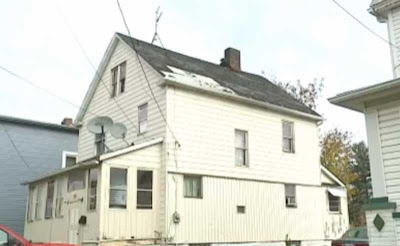 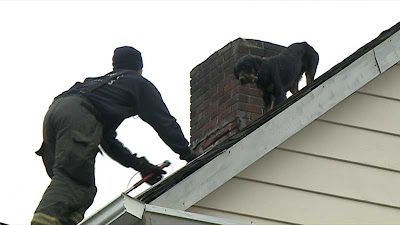 There it remained until Saturday morning when a fireman climbed up and rescued the visibly thin dog. Nelson said his office received calls about the dog earlier in the week, but that every time one of his agents went to the house, it was not there. His agents left cards at the home to let the owner know they had stopped by, but no one from the house contacted the office.

The dog is about 30 pounds underweight, Nelson said, but otherwise doing well. When her health improves, she will be eligible for adoption. Berger signed ownership of the dog over to the county. Up next for the owner, according to Nelson, is a citation for not having a dog licence. Nelson said his office gets one to two of these types of cases each year.
Posted by arbroath at 6:05 am
Email ThisBlogThis!Share to TwitterShare to Facebook

That poor dog didn't become 30 pounds underweight in three days. Good thing they took the dog away from the guy.