Four students from Olivet Nazarene University have been arrested for felony theft in connection with a missing Ronald McDonald statue in Bradley, Illinois. 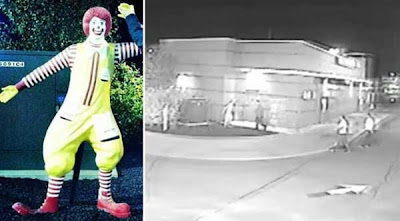 The $7,500 life-size statue of the iconic clown was found in an ONU dormitory room on Tuesday after police identified the suspects using video surveillance. "The Hamburglar was not a suspect, as much as everyone thought he was," said Brandon Jensen, Bradley police detective, who investigated the case.

Arrested were Wyatt C. Petty, 18, of LaGrange, Ind.; Cody J. Shively, 19, Mishawaka, Ind.; John R. Witts, 18, Ft. Worth, Tx.; and Savannah F. Baldauf, 18, Seneca, Ill. All four were charged with felony theft. Baldauf drove up to the drive through and ordered food at 10:49 on Friday, Oct. 16 while the three boys ripped the statue from the ground and hid it in a nearby bush, Jensen said.

They ordered eight cheeseburgers and one ice cream cone, completing the transaction at the window. The three men later returned to retrieve the statue. The suspects were found when a Bourbonnais patrolman identified the suspect's car on ONUs campus. "People might think they were stealing from a big corporation, but the bottom line it comes out of the franchise owner," Jensen said. "This is a business owner in our community, and it's still felony theft."
Posted by arbroath at 6:06 am
Email ThisBlogThis!Share to TwitterShare to Facebook

My brother studied there and ONU's campus was his home for 4 years. He did a lot of mischief. And he was fined because of driving fast on campus. But he always wrote all essays with https://domyhomeworkonline.net app widget for typing cheap papers for a college.