Fifteen deceased bodies remain unscathed after an early morning fire at the Innisvale Cemetery and Crematorium in Ontario, Canada, on Wednesday. Fifty Innisfil and Essa Township firefighters were called to the scene at around 6am. The main fire took about two hours to contain, but once the roof collapsed, it took another four hours to put out a number of small fires concealed underneath it. 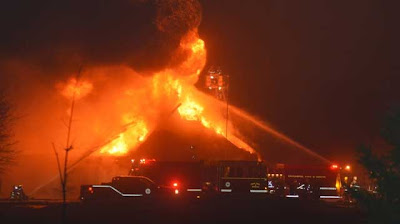 “It was quickly a defensive attack,” said Innisfil Fire Chief John Pegg over the phone. “The flames were through the roof almost immediately, so we had to pour water from the outside of the building. We never did make entry into the building itself. It’s a total loss.” Innisfil fire is estimating about $2 million in damages.

Pegg said there were 15 “previously deceased individuals” awaiting cremation within the building, but none were damaged. “Trying to protect their bodies for the families became our priority and it was actually successful,” said Pegg. “We were able to maintain the integrity of all the bodies.” 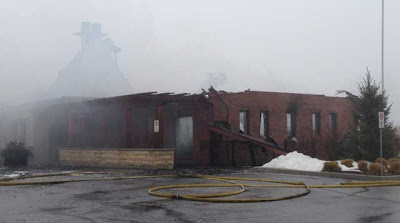 The bodies have been removed from the facility and are being transported to neighbouring funeral homes. South Simcoe police confirm there were no injuries to staff or firefighters. Police are maintaining the scene while the Ontario Fire Marshal investigates. However, Pegg says it will probably take a few days to determine the cause of the fire.

Well this is just magnificently hilarious! I wonder (for real) if there's any difference in the degree of heat of a building fire versus a crematorium fire?

I don't know what temperature crematorium ovens operate at, but Hindu funerals, with a pyre made from logs and sticks, have worked effectively for centuries.