Police have urged residents of Street in Somerset not to panic after a man holding a rubber chicken threatened to eat a woman alive on Wednesday evening. A woman was putting her bins out at Brookleigh, at around 8.30pm, when she was allegedly approached by a man waving what appeared to be ‘a long-barrelled weapon’ and a ‘fake chicken’.

He pointed the weapon at the woman and told her he was going to eat her alive and he was going to eat her flesh, according to police. She ran inside and he chased after her. He started banging on the front door and broke a window as he tried to enter the property. He failed to get into the property and made off. Police were called to the scene by the victim and people living nearby. 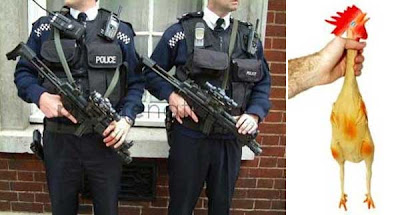 Firearms officers and police dog handlers were sent to the area. Officers also patrolled the area on foot and talked to residents to reassure them. The victims said they did not know the man, had never seen him before and didn’t know why they had been targeted. The man and his chicken have not been found.

Inspector Mark Nicholson said: “We do not want people to be panicked by this very disturbing incident. Street is a very safe place to live, and we believe this was an isolated incident. It is currently under investigation by CID and we hope to bring it to a speedy resolution.” An air rifle, believed to be connected to the incident was found on Thursday morning. The man, who was believed to be intoxicated, is described as white, in his 20s and wearing black clothing.
Posted by arbroath at 6:00 am
Email ThisBlogThis!Share to TwitterShare to Facebook