In the eyes of the law, pets are possessions and when US citizens die, they have the right to decide where they go. That is what one woman decided to do. Connie Lay, of Aurora, Indiana, had a few possible plans laid out for her dog Bela at her death. One of them being the German Shepard be put down and her ashes put with hers.

It's was a fate Bela was set to meet on Tuesday morning despite objections from volunteers who want to give her a good home. A second option in Connie Lay's will is now being considered, which means, at least for now, Bela will not be euthanised. According to Connie Lay's attorney Doug Denmore, the alternate option is to send Bela to Best Friends Animal Society in Utah, the largest no-kill animal sanctuary in the US. 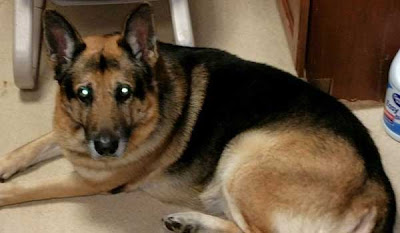 But he says that option is not financially feasible. Still, until the estate decides what to do, Bela is safe. For now, Bela is being boarded at PAWS of Dearborn County after she was found at Connie Lay's home after she passed away. According to volunteers, she is a smart, well trained, sweet dog who deserves a home. But according to the attorney handling Lay's estate, that was not her owner's wishes.

It is an option legal analyst Mike Allen says isn't entirely uncommon or illegal. "Animals are considered property and that's what the point of a will is to dispose of property upon one's death. You have that conflicting though with rules that say you have to treat animals humanely,” said Allen. Volunteers say several people have offered to adopt Bela but Denmure says it's Lay's dog and the executor of her will has the authority to carry out her wishes.
Posted by arbroath at 6:04 am
Email ThisBlogThis!Share to TwitterShare to Facebook

Clearly the woman did not love her dog at all.

The woman loved herself so much she thought that she had the right to take away the life of the dog who loved her. How utterly vile.

Good riddance to what I can only imagine was a narcissistic, horrid human being. This dog could bring joy to some other elderly person.