Scores of sopping-wet pedestrians have complained to police after being splashed when motorists drove through puddles, figures show. Police forces across England and Wales show upset walkers contacted officers accusing drivers of swerving deliberately into standing water. Some said they were deliberately targeted, while others said police officers were among the perpetrators. Several motorists were tracked down and given driving advice, while a handful of others could not be traced. Splashing falls under section three of the Road Traffic Act 1988, and can often be punished through a fixed penalty notice. Details of those investigated for splashing were released by police forces under the Freedom of Information Act.

They showed there were 63 reported incidents of motorists driving through a puddle and causing pedestrians to be splashed during a five-year period from January 2009, according to the six police forces with details on splashing. South Wales police said there were 38 cases of splashing reported, with victims as young as 10. One complainant said a bus driver accelerated to soak pedestrians, while a police officer was forced to apologise after driving a 4x4 through standing water. The force said a van driver was handed a ticket for a public order offence after driving “back and forth through a large puddle to intentionally splash pedestrians”, while another was spoken to by officers after deliberately driving through a puddle to splash a walker before laughing with a passenger. Two motorists found themselves on the receiving end when they were involved in altercations after being accused of splashing. 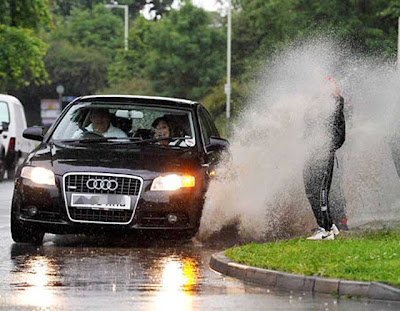 According to North Wales police, one motorist in Wrexham was injured during an argument, while another in Rhyl was challenged over their driving some days earlier. Both matters were reported to officers in 2012. A group of pedestrians contacted Cumbrian police in November 2012 after they were deliberately soaked by a car in Cockermouth. Police said the driver was given advice, and was one of nine incidents reported to the force. One unlucky resident of the Cotswolds, Gloucestershire, said they were soaked “at least five times” by drivers speeding through puddles in Rissington Road. Another complained that a police officer “swerved into a puddle on purpose” to soak him. And one concerned witness reported how a “young male driver was swerving all along” The Knapp in Stroud, “driving into puddles on purpose to splash school children walking home”.

It was one of 11 incidents reported to police, while two incidents were reported to Avon and Somerset police, and one was mentioned to Kent. Mike Frisby, the Driving Instructors Association chief examiner, said: “Motorists have a duty of care not to splash pedestrians. Normally the maximum penalty would be to get somebody’s clothes dry cleaned – it’s not imprisonable – but splashing can be easily avoided. It’s probably not widely known by pedestrians that they can report incidents if they’re splashed, but we don’t really want to engage in a culture where people are going to report every little incident. The driver has an obligation to plan well, as there is always a danger when driving through a puddle because even in shallow water drivers won’t know what lurks beneath.” A spokesman for campaigners Pedestrian Liberation said: “We frequently hear stories from pedestrians who have been splashed, from pedestrians who have to take avoiding action so as not be splashed, and also of councils that show precious little interest in sorting out the dips in the road and blocked drains that are the source of the puddles in the first place.”
Posted by arbroath at 6:03 am
Email ThisBlogThis!Share to TwitterShare to Facebook