Snake with feet found in the Philippines

Residents in Mallig, Isabela, Philippines, were puzzled after a family caught and killed a snake that had a pair of feet. 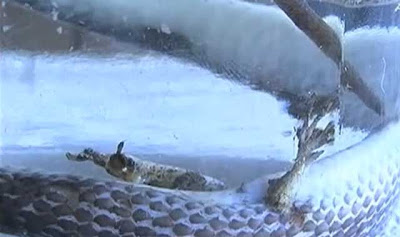 Norberto was doing his usual routine of cleaning his house, which is located at the Gambol in Barangay Olango in Isabela, when he saw a snake on the floor.

The snake tried to hide in a box, but was caught. When the family examined the reptile, they were surprised to see that it had feet like those of a lizard. After killing the snake they put in a bottle along with formalin to preserve it.

Some people have said the snake is a sign of good luck, while others have connected it with the second coming of God. However, a forestry specialist said the feet were the result of a “genetic mutation”.
Posted by arbroath at 6:05 am
Email ThisBlogThis!Share to TwitterShare to Facebook

The moron from USA said...

Not good luck for the snake.

Evolution causes genetic mutation in an effort to improve on the snake. The genetic mutation attracts the attention of humans, who kill the animal because it looks different from the others. Evolution comes to a dead end. Darwin does a facepalm.

The snake probably ate another animal that managed to kick its legs through the snake.