A man was rescued in Seattle on Wednesday morning after spending 18 hours stuck head-first down a chute attached to a railroad car, fire officials said. Emergency crews responded to the scene at about 8am after receiving 911 calls from people on the Burke-Gilman Trail who heard someone yelling for help, said Kyle Moore of the Seattle Fire Department. 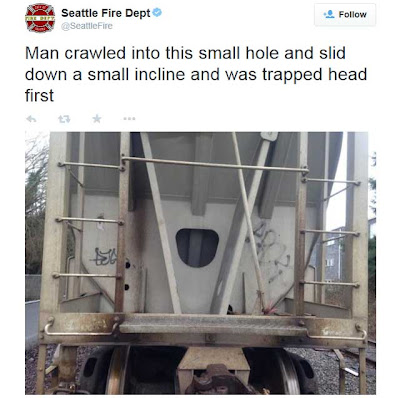 Rescuers found the 25-year-old man inside the rail car with his feet sticking up out of the chute. "We don't see these very often," Moore said. "Apparently overnight he had crawled into a hole in a void space of the car and slid head-first at a 45 degree angle down this little chute and was stuck. ... He could not move, (and) he was stuck in this very small confined space." 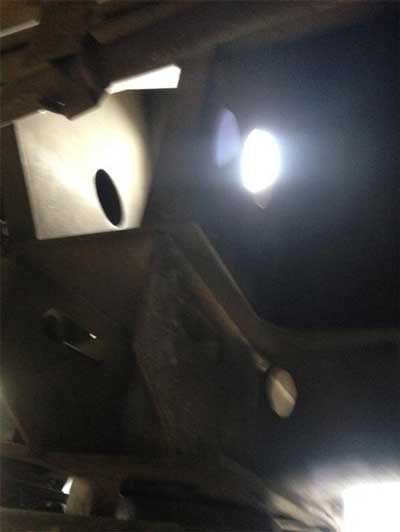 Moore said it was unclear why the man crawled into the chute. "If he actually successfully made it through the small hole at the end he would have just been underneath the train car," he said. Firefighters were able to rescue the man by pulling him out by his feet. "We wanted to make sure we used all of our skills to get him out of this very small hole without causing any further injury to him," Moore said. 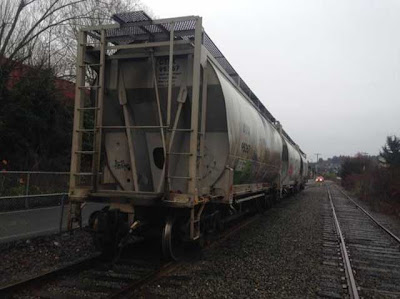 He said the man was very stiff by the time firefighters got him out. He was taken by ambulance to Swedish Medical Center's Ballard campus to be checked out. Moore said the man was lucky, all things considered. "We're very fortunate that people walking on the trail noticed what was going on and called us," he said.
Posted by arbroath at 6:05 am
Email ThisBlogThis!Share to TwitterShare to Facebook